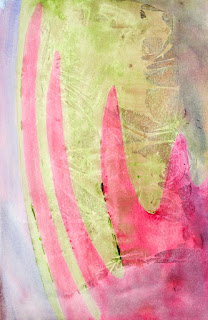 Initially, I intended this to be a landscape. I wanted to practice making converging horizontal lines at the top to represent landscape off in the distance. Plastic wrap was lay over the green and red areas and black run under the wrap mixing the green and red. The mixing didn't happen as much as wanted. The darker bottom where the black was poured would represent the foreground and the lighter less contrast top would be the distance. I even gave the top a mauve wash, the colour of distant hills. I was really trying to give it 3D perspective.

Then I asked my friend what he thought of it, and he looked at it vertically. It really looks more interesting vertically than horizontal. So it's not a landscape now, and all that 3D perspective business is for not.
Posted by Phillip Jones at 9:40 AM