I'm having a great day! It suddenly dawned on me how to make this blog more successful. It's a pretty simple idea, but just a different frame of mind than i had before. If i want this to be a medium for communicating with fellow artists, i have to develop those relationships and then maybe they'll visit here. Before i was just hoping they'd discover this blog. So i'll work on growing relationships.

I also got a couple more calls to show the house that will be vacant in May. Di and i were considering lowering the price because we haven't had any interested renters inquiring over the last couple days. But that slowness was probably on account of the Easter holiday. I'm still confident we can get that place rented on time.

I'm experimenting on the backside of a "unsuccessful" painting. I put vertical green painters tape strips down to keep part of the paper white, and then put wet indian red and burnt umber paint on wet paper in between the stripes. After that dried, i put ivory black and intense blue where the green tape had been. 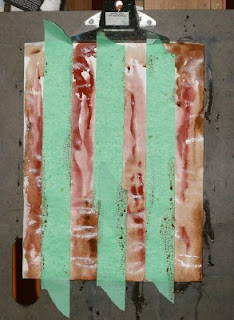 The whole thing still had a pretty flat tonal range, so ivory black was put over parts of the indian red and burnt umber strips too. I thought it was still lacking something, maybe texture? So i taped plastic food wrap over the paper and tried to drip ivory black paint down the backside of the film wrap between the film and the paper. This added texture on the areas where the paper had buckled from being wet and not being stretched and it touched the film. This created texture horizontally because the paper had buckled horizontally. I also ran my finger nail down the length film over some of the strips and that created even more markings on the paper. 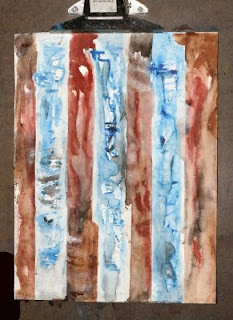 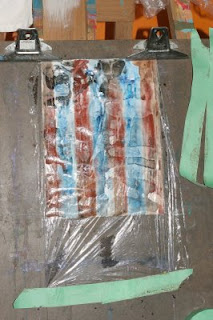 Posted by Phillip Jones at 2:20 PM